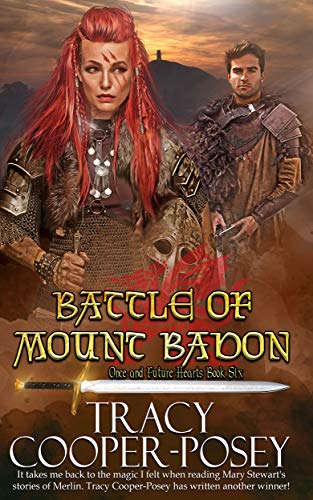 Their every encounter gives off sparks of contempt and misunderstanding.

Bedivere is one of King Arthurâs companions, his marshall and war duke of his army.Â  Handsome, remote, traditional and honor-bound, all he wants is to be a perfect warrior and serve Arthur.Â  Only, Arthurâs people face another dark winter of deprivation and defeat at the hands of the ruthless Saxons.Â  How can Bedivere find victory for Arthur when there is no hope?

Cara of Brynaich is half-Saxon, the younger daughter of a reviled family. Her facial scars keep her apart from everyone. Her heart holds only hatred for the Saxons who betrayed her mother, murdered her father and brought her and her kin to such misery. She has no time for honor and tradition.Â  Hope is for blind fools.

She brings chaos into Bedivereâs life, while his cool indifference provokes her to ever greater excesses. When the Saxons scent the weakness of Arthurâs defenses and descend upon Mount Badon, Bedivere and Cara must find a way to fight them and not each otherâ¦

This novel is part of the ancient historical romance series, Once and Future Hearts, set in Britain during the time of King Arthur.

Readers have described Tracy Cooper-Posey as âa superb story tellerâ and her ancient historical romances as âwritten artâ. Get your copy of Battle of Mount Badon today!
__

Praise for the Once And Future Hearts series

Imagine how good is the author in her craft that she is capable of surprising us her readers even though the Arthurian cycle is one of the most rewritten ones in western literature.

What a great storyteller! I never thought that anyone could tell an Arthurian tale as well as Mary Stewart, but Tracy Cooper Posey has succeeded. I am just in awe of her ability to meld historical detail with legends and turn out a mesmerizing story.

It takes me back to the magic I felt when reading Mary Stewarts stories of Merlin. Tracy Cooper-Posey has written another winner!

As a long time, self proclaimed Arthurian Legend junkie I couldnt wait to dive into Tracy Cooper Poseys new series. Tracy once again proves to be a master story teller as she weaves the delicate threads of this beloved legend into her own.

Oh my goodness. Of course I was not sure what to expect with this but what I got was a wonderful story set in the time just before King Arthur. Invading Saxons, Romans, Kings, princesses, mysteries, Merlin, and romance? Wonderful beginning to a new series and I cannot wait to read more.

I also love the fact that her female characters are definitely not boring, whiny or TSTL.

Tracy Cooper Posey is brilliant at weaving stories with individuals that are completely believable in their thoughts and dialogue.

Ms Tracy has an amazing way of telling a tale. Itâs magical :-)

Tracy Cooper-Posey is a #1 Best Selling Author. She writes romantic suspense, historical, paranormal and science fiction romance. She has published over 100 novels since 1999, been nominated for five CAPAs including Favourite Author, and won the Emma Darcy Award.

She turned to indie publishing in 2011. Her indie titles have been nominated four times for Book Of The Year. Tracy won the award in 2012, and an SFR Galaxy Award in 2016 for âMost Intriguing Philosophical/Social Science Questions in Galaxybuildingâ She has been a national magazine editor and for a decade she taught romance writing at MacEwan University.

She is addicted to Irish Breakfast tea and chocolate, sometimes take